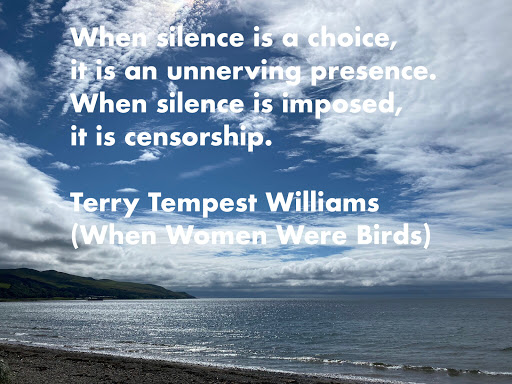 Choosing to be silent

or at the whim of others

and to channel the energy

into making a difference

instead of an argument.

not as an easy way out

but as a considered choice

that will have greater effect.

not to withhold information

a way forward together

that holds the promise

of partnership in the future.

Taking hold of the censorship

Posted by liz crumlish at 16:41 No comments: 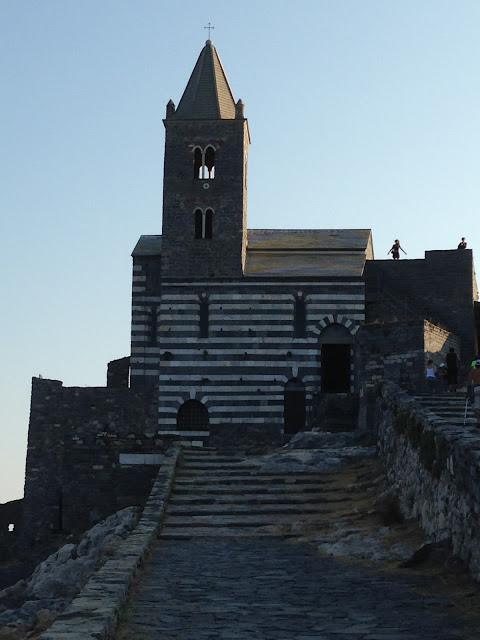 Jeremiah 31:6
For there shall be a day when sentinels will call
in the hill country of Ephraim:
“Come, let us go up to Zion,
to the Lord our God.”
“The job of a sentinel is to scan the horizon. To look. To discern. To see what is coming. To interpret. To guide. To announce. To warn.”  Stephen Cottrell, On Priesthood
“They are to be messengers, sentinels and stewards of the Lord”
(Common Worship, Ordination Services)
Sentinels everywhere
Scanning the horizon
Interpreting the signs
Warning
Announcing
Guiding
Sentinels everywhere
Were they always there?
And our busyness
prevented us from noticing?
Or has pandemic
flushed them out?
Sentinels everywhere.
What are they discerning?
What are they announcing?
Of what are they warning?
And is anyone paying attention?
Sentinels everywhere
Not all of whom can be trusted
Not all of whom should be followed
Yet it is still worth
listening carefully
for that one voice
that pierces deeply
through all our defences
signalling for us
a way forward
Not built on whim
or voyeurism
or fancy
but on a solid foundation
of grace that inhabits
and love that transforms
Pay attention
to the Sentinel
that gets beyond your defences
not to confirm your complacency
but to shake up your heart
and stir up turmoil
in the core of your being
For then you will know yourself
propelled
on the path you must follow
to a place
that is not yet known
and in the journey
will you discover
the gift of holy anger
that sustains and equips you
for the new work
to which you are called.
Posted by liz crumlish at 12:57 No comments: 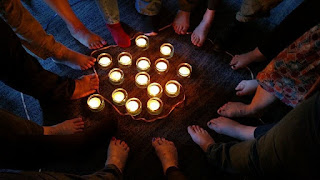 John 20:15-18
Jesus said to her, “Woman, why are you weeping? Whom are you looking for?” Supposing him to be the gardener, she said to him, “Sir, if you have carried him away, tell me where you have laid him, and I will take him away.” Jesus said to her, “Mary!” She turned and said to him in Hebrew, “Rabbouni!” (which means Teacher). Jesus said to her, “Do not hold on to me, because I have not yet ascended to the Father. But go to my brothers and say to them, ‘I am ascending to my Father and your Father, to my God and your God.’ ” Mary Magdalene went and announced to the disciples, “I have seen the Lord”; and she told them that he had said these things to her.
“There are two important days in a woman’s life: the day she is born and the day she finds out why“
When Women Were Birds, Terry Tempest Williams
Women have always known
how to multi-task
How to do a hundred things
on the way
And there are times, in the melee
when we lose sight
of the one thing
that is ours to do
Often, we rely heavily
on our sources
of comfort
and affirmation
for sometimes those
are in short supply
Mary Magdalene
encountering the risen Christ at the tomb
knew she was being re-commissioned
and must leave the love she knew
to embrace the future
that was promised
Learning when to hold on
and when to let go
Discerning what is ours to do
is the work of every woman
who continues to carry
the seed of new life today.
Still the Risen Christ meets us
and tenderly shows us the way.
Do not hold on
Discover the one thing
that is yours to do
and do it
as only you can
with the love and courage
and strength you possess
Commissioned
to live into Resurrection
Posted by liz crumlish at 05:30 No comments: 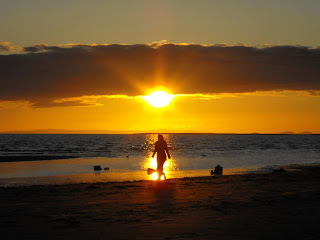 Luke 24:1-11
But on the first day of the week, at early dawn, they came to the tomb, taking the spices that they had prepared. They found the stone rolled away from the tomb, but when they went in, they did not find the body. While they were perplexed about this, suddenly two men in dazzling clothes stood beside them. The women were terrified and bowed their faces to the ground, but the men said to them, “Why do you look for the living among the dead? He is not here, but has risen. Remember how he told you, while he was still in Galilee, that the Son of Man must be handed over to sinners, and be crucified, and on the third day rise again.” Then they remembered his words, and returning from the tomb, they told all this to the eleven and to all the rest. Now it was Mary Magdalene, Joanna, Mary the mother of James, and the other women with them who told this to the apostles. But these words seemed to them an idle tale, and they did not believe them.
You may write me down in history
With your bitter, twisted lies,
You may trod me in the very dirt
But still, like dust, I'll rise.
Maya Angelou
The story of women
is one of being discounted
disbelieved
disregarded
spoken over
mansplained
That’s how women learn
to practice subversion
conserving our energy
and our passion
for co creating a better future
for co creating
love
and justice
and beauty
changing the world
one subversive act at a time.
I sometimes wonder whether
if women hadn’t been excluded
from board rooms
and corridors of power
they would have opted out anyway
intent on making a better world
instead of endlessly talking about it
How often the “idle tales”
turn out
to be the best news of all
told in the breathless excitement
of women who have glimpsed
a brave new world.
Posted by liz crumlish at 10:36 No comments: 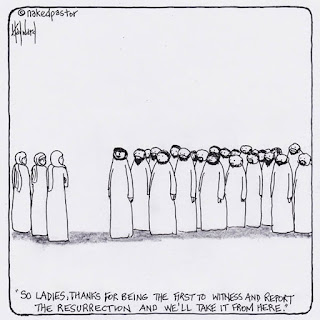 On the Feast day of Mary Magdalene
Mark 16:9-10
Jesus Appears to Mary Magdalene
Now after he rose early on the first day of the week, he appeared first to Mary Magdalene, from whom he had cast out seven demons. She went out and told those who had been with him, while they were mourning and weeping. But when they heard that he was alive and had been seen by her, they would not believe it.
It is said that Mary
was a woman possessed.
A woman whom Jesus delivered.
I’ve long wondered
whether those demons
with which Mary was possessed
were those traits that threatened
to smash the patriarchal culture.
Things like
Love
Passion
Persistence
Loyalty
Fierceness
Curiosity
Intuition
Perhaps Jesus didn’t so much deliver her
Perhaps he encouraged her
to live into her calling
as a disciple
And in so doing
her demons
were exercised
rather than exorcised.
And we who seek
to smash the patriarchy today,
We whose work is to continue
in the line of Mary Magdalene
dismantling glass ceilings
shard by tiny shard
cut and bleeding as we go
are also labelled as possessed
and bear that label with pride
knowing that the Risen Christ
assuages our demons
encouraging us
to love
to be passionate
to be persistent
to be loyal
to be fierce
to remain curious
(Curiosity prevents us from judging)
and to use our intuition
as those called today
to stay by the cross
to watch over the empty tomb
and with all that we have
to proclaim resurrection.
Posted by liz crumlish at 09:11 No comments: 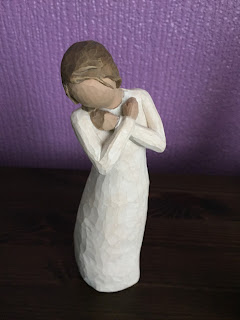 1 Kings 19:11-13
Elijah Meets God at Horeb
“Go out and stand on the mountain before the Lord, for the Lord is about to pass by.” Now there was a great wind, so strong that it was splitting mountains and breaking rocks in pieces before the Lord, but the Lord was not in the wind; and after the wind an earthquake, but the Lord was not in the earthquake; and after the earthquake a fire, but the Lord was not in the fire; and after the fire a sound of sheer silence. When Elijah heard it, he wrapped his face in his mantle and went out and stood at the entrance of the cave. Then there came a voice to him that said, “What are you doing here, Elijah?”
“Word by word, the language of women so often begins with a whisper”
When Women Were Birds: Terry Tempest Williams
Each time I preside at table
I bear the weight
of countless generations of women
who persisted
so that I might hold up bread
and break it
no longer whispering
but confidently speaking
words of institution
words of inclusion
words of grace
“Broken for you“
Women who were subversive
Women who were creative
Women whose persistence
subversion
and creativity
made space
quietly disrupting
a narrow, one track
patriarchal vision
with infinite possibility
Women who, in the midst of darkness
kindled light
and in the grip of adversity
fostered resilience
As I take my place
at the table
these women
crowd in with me
lending their weight
to the words
no longer whispered
but spoken
in clear and ringing tones
Their weight is a feather weight
without burden
except that of compulsion
to continue to make space
for women
whose whisper
is still emerging
or for women
whose language
is still constrained
by millennia of noise
that still threatens
to drown out
the emergence
of a woman’s whisper.
Posted by liz crumlish at 14:12 No comments: 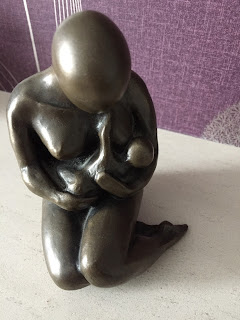 “Her absence became her presence”  When Women Were Birds: Terry Tempest Williams
The pages of history are littered
with men telling the stories
of women they barely knew
far less understood
They fill in the blanks
and rub out the mystery
and concoct a fiction
they may earnestly believe
but that bears little semblance of truth.
Scripture too
bears all the marks
of redactors
whose bodies could not know
the cycle of nature
the passion and beauty
the promise and the scars
the strength and sacrifice
the complexity
and compulsion
of womanly wiles
And it would be
much too dangerous
to give power
to the absence
in a similar way
that it was once purported
that pockets in a woman’s dress
would lead to sedition
So the spaces
are not allowed to be
for fear they will grow
into a story untamed
beyond control
of the raconteurs
with agendas to be met
and pages to be filled.
And the stories
of absent women
are moulded
and chiselled
made safe
for the sharing.
Until a new generation emerges
to break open the moulds
and allow absence
to be presence
once more.
Posted by liz crumlish at 16:37 1 comment:

liz crumlish
Prestwick, Scotland, United Kingdom
Constantly trying to escape the boxes that others construct and live as beloved of God. Love to process life and faith while walking the beach.